I wake up at 6am in darkness. If I sleep in to 7, my room will still be cloaked in darkness….Clementines….Christmas…associations from childhood drift into my head…and then I remember: today is winter solstice. In days to come the sun will linger a few minutes longer each day.

gifts of the sun…

all from afar away…

gold in the toe: 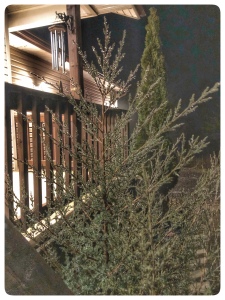 a harsh domain of clay and shale…

one day a wild seed

rooted by the cedar stair

We shiver awake in late autumn

As the sun sleeps

we make breakfast and tea

Until the sky brightens

to light our way.

in this somnolent time

Note: I have combined a cherita with a haiku to create a “cherita haibun” for Carpe Diem #1544 which features “autumn lamplight” a kigo (season word) for Japanese haiku.

sun on a dull day

with no blinding glare

After a thunderous new moon night

It is then that I know:

the light trembling within grey clouds

whispered of a majestic morning sun.

A cherita is a six-line poem divided into units of one, two, and three lines. It is supposed to tell a story…For more information I would suggest thecherita.com.

eyes near road edge
I apply the brakes

a baby raccoon,
then three squirrels
out to play on a mild winter night

My second cherita is a winter night driving story for Carpe Diem Weekend Meditation #17: Out of the Carpe Diem Box. The Cherita challenges you to write a narrative with three ‘stanzas’ of one, two, and three lines. You will find more information about the form at the link above.

our homes razed
by airborne terror

This is written in response to a radio interview this morning from Yemen.  I was looking for a story to tell with a Cherita, a poetic form recently featured by Carpe Diem Haiku Kai. No poem large or small could capture this unfathomable situation…three years of a foreign-backed war, millions of lives and dreams destroyed:

…what the United Nations has called the world’s worst humanitarian crisis.

Since 2015, a Saudi-led coalition backed by the United States has been carrying out airstrikes in Yemen against Iranian-allied rebels.

The UN says the war has killed more than 10,000 civilians, displaced some two million people and pushed millions more to the brink of famine.