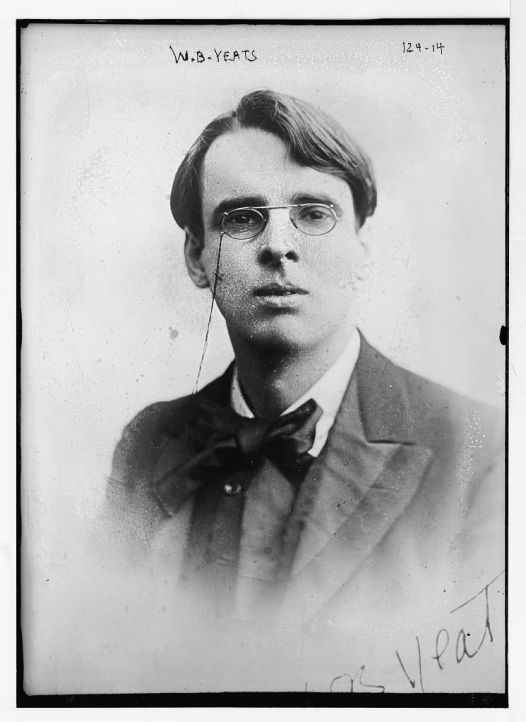 Think like a wise man but communicate in the language of the people.

I find this thought, attributed to William Butler Yeats, worth considering.  We all are governed by life experiences,  our own knowledge base, local/cultural linguistics, etc.  We have stylistic choices as well.  My leaning is towards simplicity–or attempting simplicity–attempting to use words and phrases that are  understandable by an imagined collection of readers. Whether I am successful will depend on the reader, but I nevertheless see accessible language as an ideal goal. Below I have reproduced Yeat’s ‘Lake Isle of Innisfree’, which I find very easy to absorb though written in 1888.  I have also reproduced a quote below the poem, in which Yeat reflects about the language that he used.

I will arise and go now, and go to Innisfree,
And a small cabin build there, of clay and wattles made;
Nine bean rows will I have there, a hive for the honey bee,
And live alone in the bee loud glade.

And I shall have some peace there, for peace comes dropping slow,
Dropping from the veils of the morning to where the cricket sings;
There midnight’s all a glimmer, and noon a purple glow,
And evening full of the linnet’s wings.

I will arise and go now, for always night and day
I hear lake water lapping with low sounds by the shore;
While I stand on the roadway, or on the pavements grey,
I hear it in the deep heart’s core.

I had begun to loosen rhythm as an escape from rhetoric and from that emotion of the crowd that rhetoric brings, but I only understood vaguely and occasionally that I must for my special purpose use nothing but the common syntax. A couple of years later I could not have written that first line with its conventional archaism — “Arise and go”—nor the inversion of the last stanza.

“William Butler Yeats was an Irish poet and one of the foremost figures of 20th-century literature. A pillar of both the Irish and British literary establishments, in his later years he served as an Irish Senator for two terms.” Wikipedia

I would like to thank Elusive Trope who recently posted The Second Coming by Yeats –a brilliant poem reflecting on the social/political climate of  Yeat’s time, but feeling relevant today. My choice of quotes for this Writer’s Quote Wednesday post had a circuitous journey of its own branching off from The Second Coming.  If you are in the mood for more nature poetry of the same era, please visit Silver Threading at the Writer’s Quote Wednesday link above, where Colleen Chesebro features poet Mary Webb.

3 thoughts on “Language of the people”